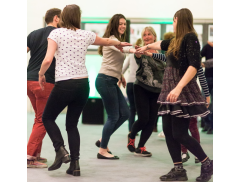 Adored London ceilidh band Want an award winning band of fun traditional musicians to perform at your wedding or any other event in London? This band of musicians has performed for Mick Jagger, Zoe Ball, Robert Smith of the Cure, Princess Beatrice, Princess Eugenie and Frank Skinner to name a few.

A professional, fun Ceilidh band! One of the most popular, versatile, successful and affordable traditional ceilidh bands in London, Wraggle Taggle Ceilidh Band perform live Irish, Scottish, English and American music, dance and songs. They go out as anything from a duo to a six-piece amplified or acoustic, with or without a caller. Our founder Founded by Mick Bailey (Guitar/vocals) in 1998, the band has many years of success including performances for Mick Jagger, and Robert Smith of The Cure. Celebrities they've performed for include: Princess Beatrice, Princess Eugenie, Zoe Ball, Frank Skinner, Clive Anderson, Ian Hislop Stephen Fry, Alan Davis, Dara O'Briain, Sanjeev Bhaskhar, Meera Syal, Aimi MacDonald, Bert Weedon, Jon Snow, and Imelda Staunton.

"Mick, just want to say a huge thank you to the three of you for yesterday. My mum absolutely loved it and I've had a lot of messages about how much our guests enjoyed it. Will write up a proper testimonial and email over when I get a chance" Ruari Phillips 10th March 2019

3 years ago by Ruari Phillips
ST

"I would totally recommend Wraggle Taggle"

"Wraggle Taggle were professional, very accommodating, and went down a treat. They offered both amplified and non-amplified music and using their amplifiers were able to hold a full room of 90 loud and merry party goers. I would totally recommend Wraggle Taggle for any party or event and if the theme lent itself, I would, without doubt, use them again" Best wishes Seb Teuber, The King's Royal Hussars 22nd February 2019

3 years ago by Seb Teuber, The King's Royal Hussars
RH

"Everyone had a great time"

"Dear Mick, I just wanted to say thank you very much to yourself and the rest of Wraggle Taggle for performing so brilliantly at my party yesterday. Everyone had a great time, and thoroughly enjoyed themselves. You helped to make the organising of the evening so straightforward which was much appreciated! Kind regards" Rachel Haig 17th February 2019

3 years ago by Rachel Haig
RS

We will book the group again and maybe be an annual event!"

"Dear Mick, Thanks again for a wonderful evening and a night to remember. I had lots of very good feedback from everyone and we all enjoyed the music and we folks with children appreciated the callers encouragement of getting them involved and remembering peoples names. We will book the group again and maybe be an annual event at the church! Many thanks" Rev Stephen Maclean Cricklewood Baptist Church 4th February 201

"I certainly will be hiring you again"

"Thank you Wraggle Taggle for a fantastic Ceilidh on January 26th in Oxford, to celebrate my 50th. Everyone is raving over your music playing (especially me!). Big thanks as well to your fantastic caller Margaret (and hubby). We all had a blast! Several of the children want you for their next birthdays and I certainly will be hiring you again given the chance. Thank you for helping to make it a truly blessed evening" Christine Nixon 1st February 2019

3 years ago by Christine Nixon
SG

"My apologies I am just getting around to sending this email. I would just like to say thank you very much for the fantastic music you provided on Wed night" Sgt Gemma Kirkwood, Northwood Police and Security Squadron, Northwood HQ, London 29th January 2019

3 years ago by Sgt Gemma Kirkwood